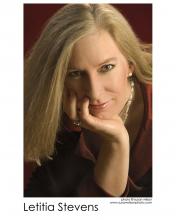 British soprano Letitia Stevens has been praised for her expressive performances, warm, rich tone and comic timing. Ms. Stevens recently returned to singing soprano, after many years singing mezzo-soprano: her first soprano role was Queen of the Night in Die Zauberflöte with Connecticut Lyric Opera, November 2017, a role she recently reprised with Opera51, “a wonderful Queen of the Night! …high Fs are amazing!” Her first post-covid production was with Cambridge Chamber Ensemble, covering Isabella in Wagner’s Forbidden Love. Immediately pre-covid she was fortunate to sing Madame Herz/Goldentrill in Der Schauspieldirektor with Rhode Island Opera on Tap, as well as excerpts of Queen of the Night and Countess. In July 2019 she gave return recitals at Rozet and Marthon in south-west France, about which Charente Libre wrote, “…she ignited the room with a majestic interpretation…”. In early 2019 she appeared as Rosalinde in Die Fledermaus with Lyric Opera Studio, Weimar and before that she sang Cleopatra in Handel’s Giulio Cesare with The Connecticut Virtuosi & Connecticut Lyric Opera. In 2018-2020 she was a semi-finalist in: The American Prize, in both Opera and Art Song divisions; Talents of the World Competition and Harold Haugh Light Opera Competition. Will Crutchfield of Teatro Nuovo, recently remarked that he was “very impressed” with her performance. Looking forward, Ms. Stevens will make her Boston Bel Canto Opera debut in January 2022 singing excerpts from Verdi’s Il Trovatore. She is also scheduled to sing Estelle in Hugo Weisgall’s The Stronger and to return once again for recitals in France.

Ms. Stevens teaches voice, music theory and beginning piano. She holds a Master of Music in Vocal Performance, with distinction, from the Longy School of Music, Cambridge, Massachusetts, where she was an honors winner.

Letitia has extensive experience as an ensemble member, including work with the Handel and Haydn Society, Boston Baroque, Church of the Advent, Boston, Cappella Clausura, Orpheus Singers, Boston Academy of Music, the Philharmonia Chorus, of London, and the London Chamber Choir.

Before making a career in music, Letitia had a career as a furniture conservator. She worked at The Wallace Collection, in London and was an intern at The Museum of Fine Arts, Boston. During many years of self-employment she was also privileged to work on many fine pieces of furniture for private collections and for the occasional museum. Since graduating from the Longy School of Music she has worked in music administration; she was Executive Director of the Newton Symphony Orchestra, and manager of Marketing at Boston Baroque. She continues to consult in Conservation and works in administration for private individuals.