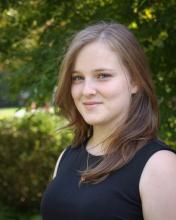 Praised as a singer “with sensitivity” and the voice “of a mature musician” (Daily Hampshire Gazette), Patricia Kopko is a Boston-based soprano and handbell ringer, specializing in opera, art song, and choral singing. As a performer, Patricia believes in the importance of the shared experience music creates. She is committed to telling a variety of stories through music, sharing both beloved favorites and lesser-known treasures.

In Boston, she has performed with the North End Music and Performing Arts Center Opera Project, Longwood Opera, Winsor Music, and the Harvard Early Music Society. A performer who celebrates obscure works, Patricia has sung roles in lesser-known and contemporary operas, including Cecilio (Lucio Silla by Mozart), Joy (The Araboolies of Liberty Street by Perera), Common Rose (The Little Prince by Portman), and Soldier 2 (Stone Soup by Larsen). She is a member of the Cantata Singers and has previously sung with the Metropolitan Chorale and the chorus of Odyssey Opera.

Patricia is an associate member of the Back Bay Ringers handbell ensemble and has played with the group at the Shalin Liu Performance Center in Rockport, MA, at the Handbell Musicians of America National Seminar, and at Boston’s Symphony Hall with the Boston Pops.

Patricia received her master’s degree in vocal performance from the Longy School of Music in 2020. She holds a bachelor's degree in both music and chemistry from Smith College. She was a winner of the Smith College Concerto Competition and was awarded the Ernst Wallfisch Prize for "outstanding talent, commitment, and diligence”. She also studied traditional Korean music and Korean language at Ewha Womans University in Seoul, South Korea.