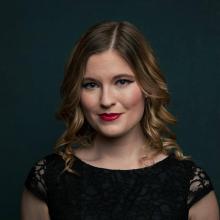 Kristen Murdaugh, mezzo-soprano, is a performer of opera, oratorio, and art song. With a passion for contemporary repertoire, she recently sang the role of Estelle in John Musto’s Later the Same Evening under the direction of Robert Tweten and Joshua Major. In the spring, she will sing the role of Zita in Puccini’s Gianni Schicchi and La Zia Principessa in Puccini’s Suor Angelica under the direction of Steven Goldstein. Her opera credits include Madame Flora in Menotti’s The Medium as well as roles in works by Bizet, Britten, Mozart, Puccini, Rossini, and Gilbert & Sullivan. An avid performer of sacred repertoire, she has been a featured soloist with the South Carolina Bach Choir, North Carolina Baroque Orchestra, Furman Symphony Orchestra, and Furman Chamber Choir on works such as Bach’s Die Elenden sollen essen, Britten’s Rejoice in the Lamb, and Honegger’s King David. She is currently in her second year as the alto section leader at the United Parish of Brookline where she recently sang the contralto solos in the world premier of Christopher LaRosa’s oratorio Joshua. She has participated in masterclasses led by Betsy Bishop, Kathryn Cowdrick, and Martin Katz while in the United States, and in masterclasses led by Angelika Kirchschlager and Luigi Marzola while studying and performing in Europe. Kristen holds a Bachelor of Music degree in vocal performance and German studies from Furman University where she graduated summa cum laude. She is currently working on her Master of Music degree in vocal pedagogy at the New England Conservatory of Music. Her teachers include Lisa Saffer, Ian Howell, Lisa Barksdale, Jill Feldman, and Trudy Fuller.