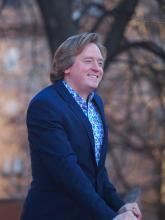 Nate Ramsayer is a professional singer in Boston, performing regularly with the BSO and Boston Pops. As a freelance artist he has sung backup for classical and Broadway greats such as Andrea Bocelli, Sarah Brightman, Audra McDonald, Heather Headley, and multiple tours for Josh Groban. He has also performed as a singer for the international tours of The Legend of Zelda: Symphony of the Goddesses, Game of Thrones: Live Concert Experience, and Star Wars: In Concert. An avid lover of musical theater, Nate has been a part of 13 different productions of the show Les Misérables—landing DASH Award nominations for Best Supporting Actor twice (roles of Enjolras and Marius); he now serves nationally as a consultant for the show. Recent shows you may have seen him in include Jesus Christ Superstar, Disney’s The Little Mermaid, Into the Woods, Bonnie & Clyde, and three productions of Disney’s The Hunchback of Notre Dame. Nate has also performed widely around New England in nursing homes and assisted living facilities, spreading the joys of jazz standards, musical theater favorites, and holiday-themed programs to these senior communities.

Additionally, he holds an M.A. degree in Hebrew Bible and the ancient Near East from Brandeis University, and serves as a freelance biblical studies instructor, giving guest lectures at churches, synagogues, schools, and universities. He is also an archaeologist who has excavated at numerous sites in Israel, Russia, and the U.K. Other Nate fun facts: he sings in an award-winning barbershop quartet called Deadline, and is a former karaoke host, samurai sword tournament champion, and one of America’s top-scoring Ms. Pac-Man players.