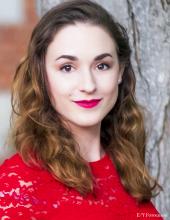 Praised for her "beautiful upper range" and "sparkling tone", soprano Jessica Arielle Bloch has recently advanced to the semi-finalist round for the 2021 Music International Grand Prix. She was also a semi-finalist for the 2019-2020 American Prize in Art Song/Oratorio for the Women's Collegiate level, a semi-finalist for The Orpheus Competition 2020, and a finalist at the 2019 Great Italian Songs Competition. Fresh out of her collegiate education, Jessica sang Despina (Così fan tutte) as a Resident Artist with the Mountain Opera Company's inaugural season, Mozart in the Mountains, and continued as a 2019 Renee Greenberg Emerging Artist with Opera Fusion in Ft. Lauderdale, Florida. At Opera Fusion she covered Nella (Gianni Schicchi) and sang in her third production of Suor Angelica as Sorella Cercatrice II. Moving into 2020, Jessica made her Boston debut singing scenes as Phoebe from A Gentleman's Guide to Love and Murder, and Francesca from Bridges of Madison County with the up-and-coming musical theater company, The Rainbow Connection Performing Arts Company of Boston. Recently she also appeared in concert with the North End Music & Performing Arts Center (NEMPAC Opera) for their 2020 summer Opera from the Balcony series, singing selections by Richard Strauss, Mozart, and Donizetti. Throughout the COVID-19 lock-down and phases in her locale, Jessica has continued to be a part of several virtual concerts broadcasting on both YouTube and Facebook. She was also invited by Angel Blue to sing Sophie's part in the Presentation of the Rose (Der Rosenkavalier) by Strauss, on Christine Goerke's virtual masterclass with the Opera Training Studio. Currently Jessica looks forward to her next performances involving song repertoire. This December, she will perform "Hearts on Sleeves" in recital with Dell'Arte Opera Ensemble's recital series: Songs from Hibernation, including works by Robert Owens, Juliana Hall, Cecil Cohen, Undine Moore, Poldowski, and Strozzi. To kick off 2021, Jessica will be recording Dana Kaufman's Three Beasts, adapted for piano and voice with the Christman Opera Company. In addition, Jessica will be making her (hopefully live) New York City debut as a Young Artist with Dell'Arte Opera Ensemble's Love For Truth Festival in 2021 as the Concepcion/Young Juana cover and Ensemble for Carla Lucero's new Spanish opera, Juana.

Past performance credits include originating the role of Miss Johnson in Douglas Buchanan’s World Premiere of Bessie and Ma; covering Belinda in Dido and Aeneas; Amalia Balash in UConn Opera Outreach’s She Loves Me; and completing her Master of Music in Vocal Performance degree recital. Jessica also made her debut with Hartford Opera Theater as Titania for their New in November Nine Festival, exploring Paul Richards new work, The Loathly Lady. Other operatic credits with UConn Opera Theater include Noèmie (Cendrillon), Suor Genovieffa (Suor Angelica), and Susanna (Le nozze di Figaro). After performing Susanna, Jessica has since tackled more Mozart heroine’s such as Zerlina (Don Giovanni) and Pamina (Die Zauberflöte), both under the baton of Maestro Christian Schulz at the Vienna Summer Music Festival in 2017 and 2018 respectively.