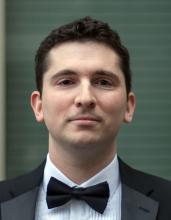 Pianist, vocal coach, and conductor Brendon Shapiro is quickly garnering a reputation from coast to coast as a champion of new music and opera of the 20th and 21st centuries. He is a recent alumnus of LA Opera's Young Artist Program, where he worked with such artists as Renée Fleming and Susan Graham and played a key role in the musical preparation for the world premiere of Matthew Aucoin's Eurydice, as well as productions of La Traviata, El gato montés, La Clemenza di Tito, The Light in the Piazza, and Satyagraha. He was an Emerging Artist with Boston Lyric Opera where he served as pianist and coach for The Rape of Lucretia, Pagliacci, and Cavalleria Rusticana, and for numerous other concerts and events.

Brendon has also been on the music staff at numerous summer festivals around the United States, including Opera Maine, Opera Steamboat, Opera North, and Opera NEO, and was music director for the first four seasons at The Woodstock Playhouse. In New England, Brendon has been on faculty as a vocal coach at Boston Conservatory at Berklee, UMass Amherst, and the Boston University Tanglewood Institute; served as conductor and pianist for MassOpera, Boston Opera Collaborative; and served as pianist/coach for Juventas New Music Ensemble and NEMPAC (North End Music & Performing Arts Center).

Brendon holds a M.M in Collaborative Piano from Boston University and a B.M.O. from Ithaca College School of Music. He currently resides in Malden, MA with his husband, tenor and composer Omar Najmi. Please visit www.brendonshapiro.com for more information. 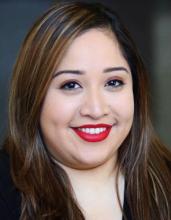 Julimar Alarcon (she/her/hers) is a Boston based soprano. As an active performer in the Boston area, she has appeared in roles including Marcellina (Le nozze di Figaro), The Abbess (Suor Angelica), Little Red (Little Red Riding Hood), Clorinda (La Cenerentola), and Damigella (L'inconorazione di Poppea), among others. A native of Queens, New York, she came to Boston in 2019 to pursue a Master of Music in Vocal/Opera Performance at the New England Conservatory of Music. She also holds a degree in Vocal Performance from the University of North Florida. Julimar's experience in arts administration stems from working in the marketing department at the New England Conservatory of Music. 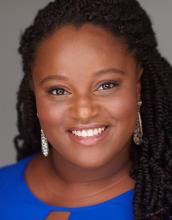 Brianna J. Robinson is a passionate and education-driven soprano with experience in opera, music/arts administration, community service and other aspects of the classical music community. For the 2019/2020 season, she is an Emerging Artist with the Boston Lyric Opera. Her work in administration includes an Arts Leadership certificate from the Eastman School of Music, where she completed coursework and internships to gain skill and knowledge in the field. Brianna served as an Americorps volunteer in 2015/2016 with Seattle Music Partners, serving as Program Coordinator and Teaching Artist.

Brianna is a proud graduate of Ohio Wesleyan University with degrees in Vocal Music Performance and Black World Studies. She received her Master of Music degree in Performance and Literature from the Eastman School of Music in May 2018.

Lyric soprano Melynda Davis has performed with companies including Boston Lyric Opera, Opera Boston, the Boston Pops, Boston Opera Collaborative, Lowell House Opera, Opera Providence, Empire Opera, New York Lyric Opera, the Martha Cardona Theater and Manhattan Opera Studio. She has placed first in the NATS Competition and second in Boston's Leontyne Price Vocal Arts Competition, and was a finalist in Connecticut Opera Guild’s Competition. Melynda sang in the East Coast premiere of Mary Watkin’s American Opera Dark River with the Mount Holyoke Orchestra. Recently, she performed Dan Shore's Freedom Ride with MassOpera, and performed with Boston Modern Opera Project in their "Roaring Twenties" concert. On the roster of Opera on Tap Boston and member of their Board, she participates in performances in and around the Boston area. She is currently the soprano section leader at the First Baptist Church, Lexington.

Adrian Jones, tenor, has a B.M. from Otterbein University in Westerville, OH and an M.M. from the New England Conservatory in Boston. He has performed with Boston Opera Collaborative, Opera Hub, Odyssey Opera, and Opera Boston. A lover of choral music, Adrian has also sung with the Metropolitan Chorale, Seraphim Singers, Kings Chapel, Choral Arts Society of the South Shore, Wellesley Choral Society, and has served as the tenor section leader at First Parish in Brookline since 2008. He currently works as an executive assistant and manager of board operations at the Barr Foundation. 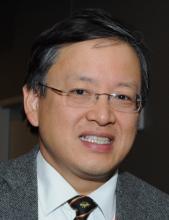 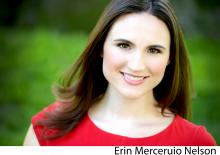 Hailed as “secure and sonorous” by the Boston Musical Intelligencer, soprano Erin Merceruio Nelson (she/her/hers) performs actively throughout New England and beyond. Her recent performances include Gretel in Longwood Opera’s production of Hansel and Gretel and Frasquita in Oprea Breve’s (NY) production of Carmen. Erin participated in Odyssey Opera of Boston’s "Trial by Fire" season, performing in Norman Dello Joio’s The Trial at Rouen (December 2017), and the Boston Youth Symphony Orchestra’s production of Bizet’s Carmen (January 2018).

Erin is the Director of Development and Operations for Shelter Music Boston, a local nonprofit that employs classical musicians to present chamber music concerts in area homeless shelters and recovery centers. She previously served as the Senior Program Administrator for the Free for All Concert Fund, and as Development Assistant at Hebrew SeniorLife. A native of Martinsburg, West Virginia, Erin holds an M.M. in Vocal Performance from The Boston Conservatory and a B.M. in Vocal Performance from Shenandoah University in Virginia. Visit Erin at www.erinmerceruionelson.com. 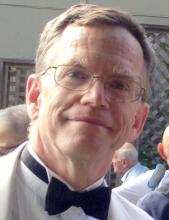 Peter Pulsifer began singing in his church choir as a boy soprano and first became serious about choral music when as a graduate student in physics in the 1980s he joined the Tanglewood Festival Chorus under John Oliver. After graduation he lived in Washington, D.C., for 16 years, where he sang with the Washington Chorus under Robert Shafer. Currently he sings regularly with the Tanglewood Festival Chorus and Chorus pro Musica, and when possible with the New World Chorale, Odyssey Opera, and others. He studied voice for many years with Robert Honeysucker. Peter is active in promoting culture and the arts, including service since 2003 on the board of Choral Arts New England, which gives grants, publishes an online directory, calendar, and newsletter, and works in other ways to support choral singing in the six New England states. He also serves on the Winchester Cultural Council and is a former Trustee of the Winchester Community Music School. Originally from Rochester, N.Y., Peter earned a B.A. from Swarthmore College and a Ph.D. from Boston College, both in Physics. Currently he does scientific and technical consulting in the Boston area. Previously, he has been a theoretical plasma physicist at the U.S. Naval Research Laboratory, has served as a scientific program manager, and has been a staff editor at the magazine Physics Today. 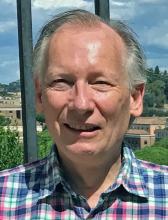 Martin Thomson, tenor, has studied at the Oberlin Conservatory and with Boston University’s Frank Kelley. He has performed as a soloist with the Boston Pops, the Cantata Singers and — thanks to connections made through the BSR — with various community choruses and orchestras. A member of the BSO’s Tanglewood Festival Chorus since 1993, he also performs regularly in the High Holy Days quintet at Temple Ohabei Shalom in Brookline. In addition to his work with the BSR, Martin is Board President of the Community Music Center of Boston. He lives in Jamaica Plain with his wife, two cats and a dog. 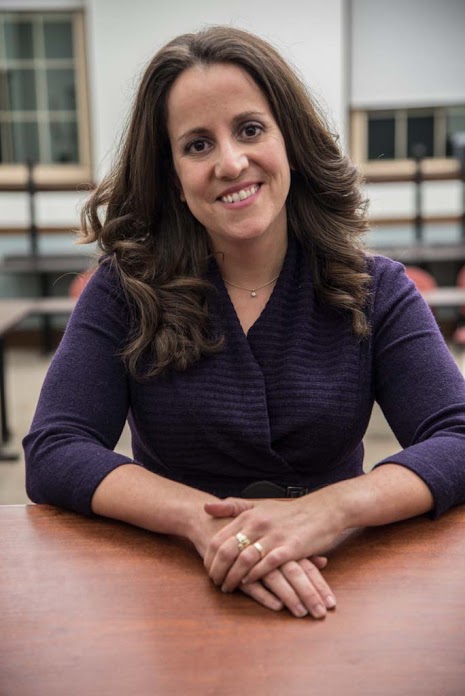 Margaret Felice (she/her/hers) is a singer, conductor, educator and writer living in Boston. She has been a member of Boston Singers’ Resource since BSR’s founding and has been Administrative/Executive Director since 2015. From 2007–2009 Margaret was President of Boston Opera Collaborative, Boston’s operatic repertory company. She later served as the Public Relations coordinator for that group, spearheading BOC’s email marketing, local media relations and social media presence. She currently directs the Liturgical Musicians at Boston College High School, is an assistant director of the Liturgy Arts Group of Boston College, and is on the religious education faculty at Boston College High School

As a performer, Margaret’s repertoire ranges from classical opera to modern musical theater, from early music to the Great American Songbook. She has sung principal roles in Suor Angelica, The Marriage of Figaro, The Magic Flute, The Crucible, Carmen, and Don Giovanni, as well as in theatrical productions of Titanic, Company, Fiorello! Annie, and The 25th Annual Putnam County Spelling Bee. She has a particular love of sacred music and has been soprano soloist in J.S. Bach's B Minor Mass, Handel's Messiah, Pergolesi’s Stabat Mater, Vivaldi’s Gloria, Faure’s Requiem, and other choral masterworks. Margaret has sung with Tanglewood Festival Chorus since 2005.

The author of a popular spirituality blog, Margaret and her writing on music and spirituality have been featured on PrayTell and Loyola Press’s dotMagis blog. She also has been published in GIA Quarterly, Pastoral Music, Classical Singer Magazine, Notre Dame Church Life Journal and Classical Music Indy. Her first book, the 2019 edition of Loyola Press’s A Book of Grace-Filled Days devotional series, was published in fall 2018.

Margaret is a regular speaker on liturgical music and spirituality, participating as a keynote presenter at Notre Dame Vision’s inaugural Summer Conference for Liturgical Music Ministers and at an Ignatian Identity Conference at Leopard’s Hill School in Lusaka, Zambia. Margaret holds degrees from Boston College and The Boston Conservatory and also studied at Emerald City Opera Institute and the Songfest Professional Program. Originally from South Windsor, CT, she now lives in Dorchester with her husband, Robert Goulston. Her résumé, calendar and blog can be found at www.margaretfelice.com. 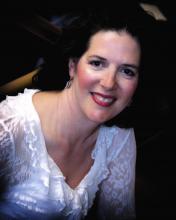 Lynn Shane is the founder and former Executive Director of Boston Singers' Resource. Under her direction, BSR became one of the leading resources for serious singers and students of singing in the New England region. Working with a team of dedicated volunteers and board members since 2001, Ms. Shane created and maintained the BSR website, organized 17 regional auditions for BSR singers and directors and written nearly 40 web article/interviews. Ms. Shane is an active member of the American Choral Director's Association, the Arts Services Coalition, the Music Educators National Association, the National Association of Teachers of Singing, Opera America, and Stagesource. She holds a Bachelor of Music Education degree from the Crane School of Music in Potsdam, NY, and a Master of Music degree from the University of Colorado. Also an active music teacher and chorus conductor, Lynn Shane has worked with all ages of students from Kindergarden through adult. She currently is on the faculty at Salem State University in Salem, MA where she teaches private voice lessons as well as Women's Chorale, History of Music, and Voice. As an active singer, Ms. Shane has appeared with several regional symphonic, music theater and opera companies as soloist. She is also a 15 year veteran of the Tanglewood Festival Chorus with whom she has recorded several CD's, toured the Far East and Europe.