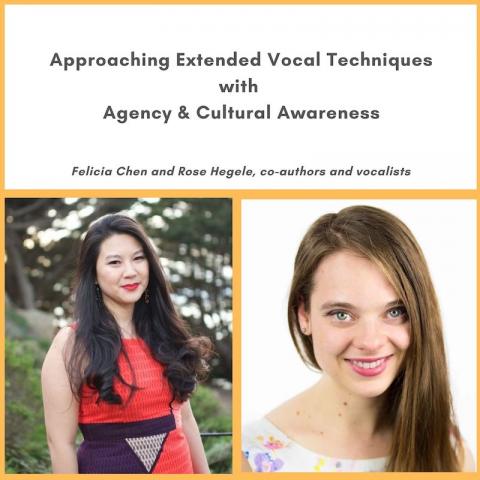 by Felicia Chen and Rose Hegele, co-authors and vocalists

One of the defining characteristics of new music, and a musician who specializes in new works, is the utilization of extended techniques. Now the debate unfolds: What is extended technique? What is new music? We met as graduate students in Boston Conservatory at Berklee’s Contemporary Classical Music Performance program, and our cohort had endless discussions on how to define the music that we create and perform, or whether to do away with definition and labels altogether. Terms such as “avant-garde music,” “art music,” “contemporary music,” and “new music” are often used (we’re fond of the suggested “unpopular music” by our colleague, bass-trombonist Neil Parsons), but none seemed to capture the breadth and depth of our artistic experiences. We continue to frame and reframe this music and the techniques involved in its performance to reflect the diversity of its practitioners and creators.

Extended technique is often defined as unconventional and/or non-traditional ways of singing and playing an instrument in order to produce sounds that are atypical. This is a flawed definition if it does not address that we are taught to approach our understanding of extended technique through a Eurocentric classical music lens. Music is beautifully diverse, with different modalities and endless ways of approaching the creation of sound. Extended techniques are seen as approaches that live outside of the standard repertory of a style or tradition, but if there is a wealth of musician styles, what is considered “standard” and what is “different?”

Defining extended techniques may be more straightforward for an instrumentalist than a singer because most modern instruments were created during a defined time period for the purpose of playing a defined style of music. But the voice is unique in that it is human’s first instrument, ubiquitous yet highly individual, and the utilization of the voice is influenced by one’s lived experience. For example, consider how we use our voices to learn a language. Our ability to speak languages is influenced by the diversity of sounds that we hear from the time we are born. The musical aspects of language, such as cadence, inflection, and tones, are often extremely difficult to learn without early and prolonged exposure.

For a singer who is trained in the western classical modality, extended techniques can be boiled down to any method of vocal production that is not bel canto singing technique. This includes speech, whispers, screams, mouth percussion, whistling, yodeling & uvular trills, polyphonic overtone & subtone singing, as well as different uses of vibrato (straight tone, extreme wobble), and timbre (breathy, belt, growl). The accessibility of these techniques is heavily contingent on the individual’s physical comfort, but psychological comfort and cultural context should also hold equal weight.

People from all corners of the Earth use extended vocal techniques (acknowledging the use of this term through a western classical lens) in sacred and secular practices. Many styles of vocal production require prolonged, intensive training - classical bel canto is one, but also Korean Pansori, and South Indian Carnatic music, to name a few. Extended techniques are also present in various cultures as a means of communication and self-expression (i.e. ululation) and in many forms of popular and folk music. Additionally, some musical cultural practices have been historically suppressed due to discrimination, colonization, cultural elitism, and the genocide and erasure of Indigenous cultures.

Both interpreters and creators of new music need to consider the ramifications of incorporating influences from a culture or musical modality that is not their own. There is a high risk of diminishing the cultural context from which an influence is derived, stripping the essence of musical artforms that are of high value to a specific group of people, and reducing cultural elements to stereotypes. That is not to say that any isolated vocal technique is owned by a singular culture, but the way in which techniques are used in music are often identifiable in specific cultural contexts. For example, one could be intrigued by the timbres of throat singing - but where and how did the interest in throat singing originate? Khoomei (Tuva/Mongolia) is rooted in a spiritual connection with nature and is distinct from Katajjaq of the Inuit, Indigenous North Americans who are still experiencing discrimination and cultural suppression in the present day. There is also Rekuhkara from Japan, which is now, sadly, an extinct performance practice. What is the artist’s relationship with these cultures, how are throat singing techniques utilized in a composition, and is one claiming ownership over something that is not rightfully theirs? We are not providing answers, but raising questions that we hope you will consider as global cultures continue to influence and inspire artmaking.

There are many extended techniques that are easily accessible for most vocalists - speech and Sprechstimme, percussive sounds, flexibility of timbre. However, singers of new music are increasingly tasked with exploring physical extremes (a reminder to non-singers that vocal production is directly related to one’s physical limitations). Unless a singer is already intimately familiar with methods of extended vocal production, due to their training or cultural upbringing, asking a singer to engage with extended techniques is often a request to take them out of their comfort zone.

If a composer is working directly with a singer, the composer should be realistic about the individualized physical nature of the singer, and should never demand that a specific singer engage in vocal production that is uncomfortable or impossible. Likewise, singers need to firmly exercise their agency regarding their individual boundaries, expressing when a means of vocal production feels good or uncomfortable. Singers should also consider how they feel physically and emotionally when approaching new music, as well as any value or moral based judgment on the utilization of techniques or subject matter.

Furthermore, mindfulness of the power dynamics within a composer/performer relationship is vital in navigating collaboration. Due to the Eurocentric notion of the ‘composer-genius,’ performers are often taught to be ‘vessels for the composer,’ and that the composer’s demands and intentions are the highest priority. This notion, coupled with the larger societal power dynamics of white supremacy, sexism, and classism, creates an imbalanced and unsafe dynamic in rehearsal and performance. As a result, raising the issue of physical or psychological discomfort in performance practice can make one feel vulnerable, threatened, or even retraumatized. Being aware of how our unique identities fit into and reinforce these structures is an important step in creating a safe and flourishing artistic space.

Reframing a performer as a co-composer or equal collaborator, alongside interpreting a musical score as fluid rather than a fixed entity, can help to re-balance these power dynamics. Conversations clarifying intent, notation and process, and how all of these work together in the context of a piece, allows for a performing artist to highlight their strengths, address any concerns they may have, and create space for experimentation. Thus, when a composer embraces a vocalist’s unique skill set and individuality, the overall process can feel more synergistic, and the final performance will be more confident, nuanced, and true to the intention of all creative parties.

Working with extended techniques is an individual journey for vocalists and composers. The understanding and approach of extended techniques varies depending on each person’s musical background, cultural identity, and lived experience. It is vital for those trained in western classical music to understand that the commonly taught definition of extended techniques is through a Eurocentric lens, which centers cultural elitism, colonization, whiteness, and male dominance. A critical examination of this lens - the ways in which one experiences it, and is harmed by or perpetuates it - is vital to allow for a better understanding of one’s own intentions and to cultivate more equitable, safer artistic spaces. Developing an awareness of one’s identity, musical background, and physical and psychological boundaries fosters individual agency, which can be more easily exercised when both composer and interpreter view themselves as equal collaborators. Finally, re-assessing and re-defining extended techniques and new music as a genre allows for a more authentic representation of the diversity of its practitioners and creators, reflecting the mosaic of unique experiences that each artist brings to the world.