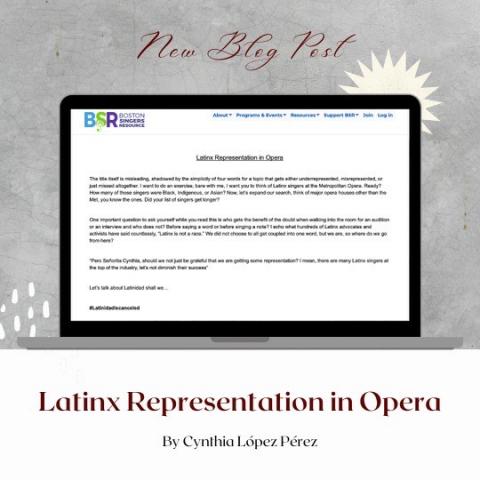 The title itself is misleading, shadowed by the simplicity of four words for a topic that gets either underrepresented, misrepresented, or just missed altogether. I want to do an exercise, bare with me, I want you to think of Latinx singers at the Metropolitan Opera. Ready? How many of those singers were Black, Indigenous, or Asian? Now, let’s expand our search, think of major opera houses other than the Met, you know the ones. Did your list of singers get longer?

One important question to ask yourself while you read this is who gets the benefit of the doubt when walking into the room for an audition or an interview and who does not? Before saying a word or before singing a note? I echo what hundreds of Latinx advocates and activists have said countlessly, “Latinx is not a race.” We did not choose to all get coupled into one word, but we are, so where do we go from here?

“Pero Señorita Cynthia, should we not just be grateful that we are getting some representation? I mean, there are many Latinx singers at the top of the industry, let’s not diminish their success”

Let’s talk about Latinidad shall we…

In 2018, a post by Alan Pelaez Lopez, an Afro-Indigenous activist, created a meme that became viral and ended the post with #Latinidadiscancelled. In the meme, there was a highway and a sign that indicated two ways, straight on the interstate or right onto an exit. The straight way has the text “Admitting racism & anti-blackness exists & a commitment to build solidarity with Black and Indigenous people”. The exit, shows a car intentionally labeled “Latinidad” taking a quick, and sharp right turn, says “mestiza supremacy & your insistence that your great- great great great grandmother was Black”.

When discussing Latinidad, an all-inclusive term for a variety of diverse folks, it’s critical to ask who this term includes and who it does not? Who benefits from this term, and who is still left out?

As it is, those in closer proximity to whiteness, cis-gender identity, heteronormativity, body-normativity and able-bodiedness will always be the face of Latinidad. This is why we must not only challenge Latinidad but be intentional with our actions within settler-colonial systems that keep others excluded.

As history shows, with any challenge against white-supremacist structures, there is always pushback. I challenge folks to reflect on what #latinidadiscancelled is really calling for: community, inclusivity and Black liberation. True allyship for the Latinx community is not passive, it requires deep understanding, it requires work to find voices that have been historically excluded for far too long. It requires active and intentional work for transformational outcomes. If the outcome only further unites our community and understanding of Latinx folks, isn’t that something to invest in? The choice is yours, one takes more work.

Alright let’s talk about the elephant in the room and why many choose to celebrate LATINX heritage month. Let’s go back to the 60’s!

Did you know this celebration started as “Hispanic Heritage Week”? It was created by Lyndon B. Johnson in 1968 and later extended to a month in 1988. It commemorates a time in which many, if not most Central American countries, celebrate their independence from Spain.

The term Hispanic was coined by Mexican-American, Grace Flores-Hughes, from the Nixon administration. “Hispanic” stems from the word “Hispania”, the Spanish Empire. Journalist Paola Ramos expands on the term in her book Finding Latinx:

“The word was able to more closely associate the community with its white European colonial past than with it’s Latin American roots. By embracing the term “Hispanic,” the community’s historic ties to indigenous peoples, enslaved Africans, and mestizos…were erased from the picture, washed away as conquistadores swept over the Americas in the fifteenth century. That was the story then: to whiten the community as much as possible.”

This colorist idea to “whiten the community as much as possible” dates back hundreds of years and the effects are still felt to this day. Many Latinx folks are still being told to this day to “mejorar la raza'' or “better the race”, echoing the ideas of the Caste system enforced by the Catholic Monarchs of Spain in the 15th century. This system was dictated by race. Your designation was literally on your baptismal record, it dictated whether you received land, had a high-paying job or a job at all, were enslaved, and had other civil rights. For this reason, and others, many have steered away from the word Hispanic and centered Latin American folks and ancestors.

According to journalist Paola Ramos, the internet exploded with the use of the word Latinx as early as 2004.

“There, the initial story was about giving voice to the silenced and often discriminated-against LGBTQ Latinos, a point that was later strengthened by the 2016 Pulse massacre of forty-nine people, most of whom were queer Latinos”

The “x” includes LGBTQIA2S+ and more specifically those who are non-binary or gender non-conforming who have ALWAYS existed and face some of the highest death rates in Latin America for simply being part of the queer community, for simply being themselves. History shows that as society adapts and develops, language changes, and with that change is inevitable pushback. In Germany, many are changing “they” to pronouns such as “ze,” “hir,” “xem” and others; facing serious criticism. In 2017, France published its first ever gender-neutral school textbook causing uproar among educators. There are major linguistic changes happening among us, worldwide, with the purpose of paving the way for a more inclusive society…which role will you play in history?

And then we have “Latine”, which we are seeing entering the linguistic arena as we speak. A version of Latinx better suited for translation in the Spanish language.

While everyone is still getting acclimated with these terms, and how they use them: I tend to use the term Latinx in English and Latine if I am speaking in Spanish. I celebrate this special month by centering Black, Asian, Indigenous, LGBTQIA2S+, disabled folks and embracing body diversity within our community. Centering does not mean everyone else in the Latinx community does not deserve attention, it means that when, and only when, these communities are recognized and listened to, will we unify our full needs as a Latinx community.

It’s nearing the end of Latinx Heritage Month, so we’ve had enough time to see what many companies are doing to promote Latinx arts and cultures in their institutions. Many companies have furthered efforts to perform more works by Latinx composers, hire more Latinx artists and share space with more Latinx folks. Here are some things I would like to see more of as we continue our efforts in DEIB (Diversity, Equity, Inclusion and Belonging), specifically for Latinx representation in Opera:

This Latinx Heritage Month, and hopefully all year, don’t just support everything that stamps Latinx Heritage Month on everything with pretty vibrant colors. Be critical of what companies/institutions are putting out there, and what we may not be seeing behind the scenes. Be critical of what Latinx representation looks like to them, and who we aren’t seeing included. Always be cognizant and humble of the work we all must do, the time and patience we all must have, and the heartbreak and exhaustion of when we fall short. DEIB work is not a department, it is not one person, it is the drive to promote cultural work, as work we all must do, as human-centered work, and as a call to mobilize. At the heart of this work is healing, and at the heart of healing is community.

Here are some fabulous accounts of Latinx artists, advocates and activists and organizations that I recommend you follow after reading this: