The Gift of Song: Voices of Black America

A unique celebration of the music and poetry of our African American heritage. In addition to the body of well-known spirituals, there is a wealth of powerful but little known poetry and music by African Americans whose lives span 1866 to the present. On this recital you will hear the “voices” of 15 composers and 15 poets, male and female. We will begin and end with songs of recently freed slaves as presented to the world by the Jubilee Singers of Fisk University in the years immediately after the American Civil War.

Spoken poems will be woven among the songs on the 5-part program. The first section is called “Out of Slavery.” The second and third parts explore the first half of the 20th century through the artistry of “The Harlem Renaissance” and the poetry and music of “The Romantics.” At the center of the recital is a touching, spoken interlude, “Jackson, Mississippi, a First Hand Account,” by baritone Robert Honeysucker, telling of his days as a student in Jackson at the height of the civil rights movement.

The recital continues with “Civil Rights – Not later. Not even soon. Now,” a section including many of the most starkly modern pieces on the recital. We close in a spirit of optimism, “Hope is born again in the faces of children.” The program’s title comes from the poem “Compensation” by Harlem Renaissance poet Paul Laurence Dunbar: “Because I had loved so deeply; because I had loved so long, God gave, in His great compassion, the gift of song.” 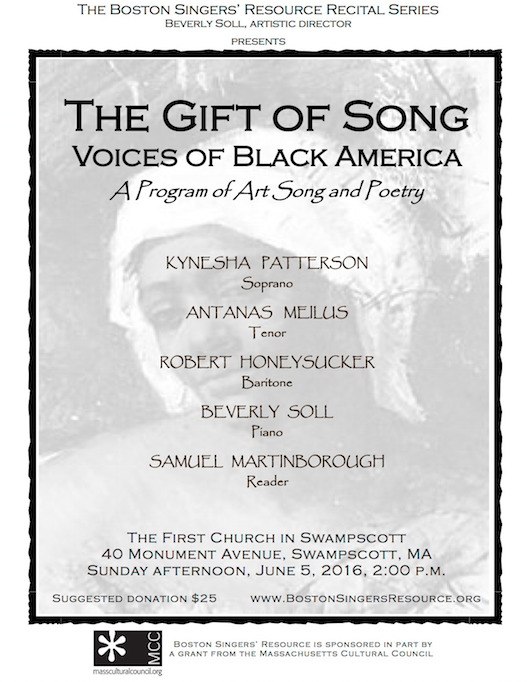