Lori Laitman joined BSR on April 26 at 6:00 pm for a conversation as part of the BSR Composers' Lab, pairing singers and composers to create new works.

Described by Fanfare Magazine as “one of the most talented and intriguing of living composers,” LORI LAITMAN has composed multiple operas and choral works, and hundreds of songs setting texts by classical and contemporary poets, including those who perished in the Holocaust. Her music is widely performed throughout the world and has generated substantial critical acclaim. The Journal of Singing wrote “It is difficult to think of anyone before the public today who equals her exceptional gifts for embracing a poetic text and giving it new and deeper life through music.”

In May 2016, Opera Colorado presented the World Premiere of Laitman’s opera The Scarlet Letter, with a libretto by David Mason. Gramophone Magazine wrote of the 2017 release: “The first thing that leaps into one’s ears is the sheer beauty of the music. Laitman has devoted much of her career to the art song, and her ability to meld words with lyrical, often soaring lines is on abundant display in her…impressive and fervent opera.” It was named a Critic’s Choice by Opera News and one of the top 5 CDs of 2018 by Fanfare Magazine. Laitman and Mason also collaborated on Vedem, a Holocaust-themed oratorio commissioned and premiered by Music of Remembrance. A staged production of this work, alongside Hans Krasa's Brundibar, is now scheduled for March 2022 with Indianapolis Opera. Laitman and Mason continue their collaboration with Ludlow, an opera-in-progress that examines the U.S. immigrant experience through the lens of the 1914 Colorado mining town disaster. The Wind Sighs, the Poet's aria from the opera, opens Stephen Powell's 2021 Grammy-nominated CD American Composers at Play.

The Three Feathers, Laitman’s children’s opera with librettist Dana Gioia (based on a Grimm’s fairy tale) was commissioned by the Center for the Arts at Virginia Tech, where it premiered in October 2014. Seattle Opera commissioned an abridged version of the work, which toured Washington State in 2018. The orchestral abridged version premiered at The Hartt School January 2019, and L'arietta Productions in Singapore presented the international premiere in November 2019. Opera Steamboat's full production will now take place in August 2022.

Uncovered, Laitman’s one-act chamber opera with librettist Leah Lax (based on her memoir), has been commissioned by a consortium of colleges and smaller companies. The World Premiere will take place in March 2022 at Utah State University in Logan, UT, followed by an East Coast Premiere with City Lyric Opera in NYC. City Lyric Opera presented The Mikvah scene virtually during the pandemic (accessible on their site). The work was a finalist for the 2018 Pellicciotti Opera Prize.

Laitman continues to receive prestigious commissions, including from the BBC, The Royal Philharmonic Society, Opera America, Opera Colorado, Seattle Opera, Grant Park Music Festival, Washington Master Chorale, Music of Remembrance and the Baltimore Symphony Orchestra. Her works have been featured on Thomas Hampson’s Song of America radio and Internet series and website, and in The Grove Dictionary of American Music. Her discography is extensive, and she has two upcoming CDs to be released on Acis Productions: Are Women People? in May 2021 and The Ocean of Eternity in winter 2022. 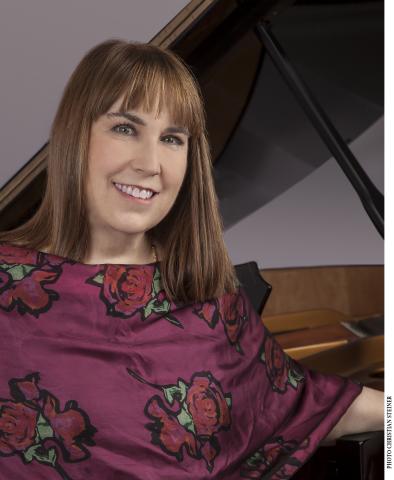